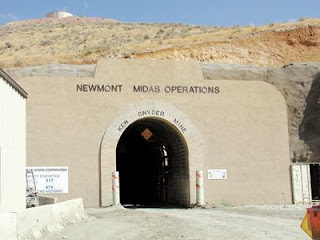 "Vancouver, British Columbia - December 4, 2013 - Klondex Mines Ltd. (TSX: KDX | US: KLNDF) ("Klondex" or the "Company") is pleased toannounce that it has entered into a definitive agreement to acquire the Midas mine and related ore milling facility located in the State of Nevada (collectively, "Midas") for approximately US$83 million (the "Acquisition") from a subsidiary of Newmont Mining Corporation ("Newmont").

The purchase price, which is subject to customary adjustments, is comprised of (i) approximately US$55 million in cash, and (ii) the replacement of Newmont surety arrangements with Nevada and federal regulatory authorities in the amount of approximately US$28 million. In addition, Klondex will issue to Newmont 5 million common share purchase warrants of the Company with a 15-year term, subject to acceleration in certain circumstances, and an exercise price to be specified on the closing date of the Acquisition.

Paul Huet, President and CEO of Klondex, commented, "This acquisition is transformational for Klondex, during a pivotal point in our company's development.  I am confident that Klondex's management team can leverage past experience, with some of the core leadership team having previously worked at Midas, to vastly benefit from the synergies and to unlock continued value in Klondex for shareholders going forward.  Our team is extremely pleased to be working alongside Newmont to bring together two excellent epithermal deposits with a high-quality central mill."

The Acquisition is anticipated to close in early 2014, subject to the fulfillment of various closing conditions, including the receipt of requisite regulatory approval and other third party consents, and entry into certain ancillary arrangements with Newmont for the provision of transition services.

A replay of the conference call will be available until January 4, 2014. 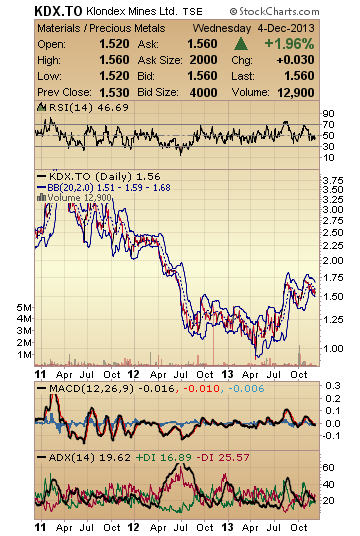 I first met President & CEO Paul Huet at the 2013 Las Vegas Money Show while assisting the only other gold company at the show (Terraco Gold Corp.).  After spending time with Paul, learning of his (and equally as important his teams) past experience and success I quickly became intrigued.  Paul was the Mine Manager, Mine Superintendent & Chief Engineer at The Ken Snyder "Midas" Mine dating back to the early 2000's.  He was also the General Manager of the Hollister Mine for Great Basin Gold and Chief Operating Officer for Premier Gold Mines.

As some will suggest it was the Ken Snyder "Midas" Mine that kept Newmont profitable in the early 2000's even at $250-$350 per ounce gold.  This, as many of our readers know is because of the freakishly high grades of these low-sulfidation, epithermal, hot spring type systems.

In the humble (33 year old) opinion of this writer - Paul and his team are simply put the best operators of these types of systems anywhere on the planet and I would encourage our readers to keep an eye on this emerging small cap company.

As an aside - these types of grades become more and more important the longer this current market environment exists.

I own shares in Klondex Mines Ltd. - however, I am not an advisor of the company.

As always, please do your own due diligence.