Francoise Faverjon-Fortin,
Vice-President, Infrastructure and Environment, Export Development Canada
February 27th, 2012 Globe & Mail Special - Sustainable Development
"Lignol Innovations has demonstrated its unique and economical integrated process technology for bio-refining abundant and renewable ligno-cellulosic biomass feedstocks into ethanol (fuel alcohol), pure lignin and other valuable co-products. Lignol’s unique de-lignification pretreatment Organosolv process separates woody biomass into its components of cellulose, hemi-cellulose and lignin. The cellulose and hemi-cellulose are enzymatically hydrolysed into sugars, which are then fermented, distilled and dehydrated to fuel-grade ethanol. The highpurity lignin can be processed into a great variety of high-value products. This innovation is a key solution for producing ethanol and high-value products from low-value feedstocks, while providing an alternative to reliance on fossil fuels."

"These approvals demonstrate the strength of our patent portfolio covering not only our unique process and systems but also our unique range of high performance lignins (HP-L lignin)," said Ross MacLachlan, President and CEO. "The combination of our strong patent portfolio, trade secrets and knowhow provides significant barriers to competitors and creates long-term value for shareholders." 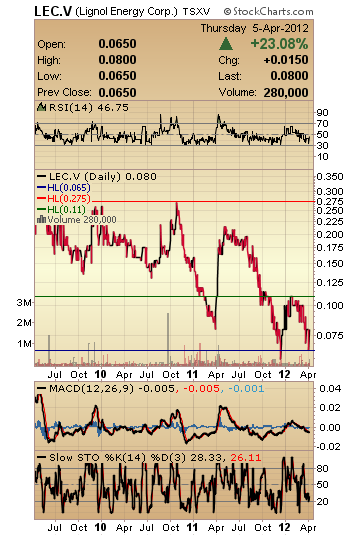 "The farther backwards you can look, the farther forward you are likely to see."
---Sir Winston Churchill

This technology holds particular interest to me - growing up in the town of Dalhousie New Brunswick, Canada the primary industry was pulp & paper.  Our family moved to Dalhousie in June of 1988 from Calgary Alberta, Canada (shortly after the Winter Olympics). The town was booming - it seemed every last person who wished to work had a good job & at the time the quality of life was very high.  Since that time a lot has changed for the North Shore New Brunswick shire town - slowly but surely the mill cut back on its workforce before ultimately closing its doors January 31, 2008. My father is one of the only remaining doctors in the town which today has a population of just 2,300 people.

"The late 1920s, when Dalhousie was picked as the site of a giant paper mill. The International Paper Company built what was then one of the largest newsprint mills in the world and the town changed forever. From 1929 on, the mill would dominate life in Dalhousie...

...  The 2007 merger of Bowater and Abitibi Consolidated resulted in the decision by the newly merged company to announce the closure of the Dalhousie newsprint mill on November 29, 2007. The mill, which produced 640 tonnes of newsprint per day for shipment by rail, truck and ship to domestic and international markets, was officially closed on January 31, 2008. Consequently the town of Dalhousie's economy is facing uncertainty during the post-industrial adjustment. Due to the closure of this mill, hundreds were left without jobs and were forced to move."
--- Dalhousie, New Brunswick Wikipedia page

This is one of the most fascinating component's of both cycles & innovation.  North American town's like Winnimucca Nevada, Weiser Idaho & Dalhousie New Brunswick decimated by the downturn in industrial production from 1980 to present may have a breath of new economic life with the "evolution of the industrial revolution (clean & renewable technology wave).

Dr. E. Kendall Pye, Chief Scientific Officer – Dr. Pye developed Lignol’s core pre-treatment technology while with an affiliate of General Electric.  Prior to founding Lignol he held a senior management position in Repap Technologies Inc. where he oversaw the development and industrial scale up of the technology after it was acquired from General Electric.  Dr. Pye has over 35 years experience in biotechnology research and consulting in commercial and academic environments. He is recognized as one of the world’s leading biorefining experts and reputable biochemical professors.  He is a former tenured professor at the University of Pennsylvania.

Ross MacLachlan, President and Chief Executive Officer – Mr. MacLachlan has served as Lignol’s President and CEO since 2005.  He is an executive with project financing and public company experience including working extensively with companies in the conventional and alternative energy sectors.  He is a frequent speaker and panel participant relating to public policy and development of the Cleantech industry.  He is an active member of the BC Cleantech CEO Alliance, serves on the boards of independent power producers Pristine Power and Swift Power (both acquired by Veresen Inc. TSX: VSN) and also serves as a board member of BIOTECanada.

Michael Rushton, Chief Operating Officer – Mr. Rushton is a seasoned business executive and chemical engineer with extensive experience in the demonstration and commercialization of chemical process technology and in project development, engineering and construction.  He is a former senior VP with Chemetics International and also former CEO of Membrane Reactor Technologies.

"Lignol Energy Corporation (TSXV: LEC) , a leading technology company in the advanced biofuels and renewable chemical sector, announced that a project led by its wholly-owned subsidiary, Lignol Innovations Ltd., has been awarded up to $2.06 million in additional funding contributions from Sustainable Development Technology Canada (“SDTC”).

“Our Government is committed to supporting clean technology in Canada as an effective measure to reduce greenhouse gas emissions and create high-quality jobs for Canadians,” said the Honourable Joe Oliver, Minister of Natural Resources. “This project demonstrates our leadership in driving clean technology innovation to help create viable new industries for Canada’s economy.”

“Lignol has a proven track record of innovation, a trend that will be made stronger with this new investment,” said SDTC President and CEO Vicky J. Sharpe. “It is innovation like this that brings Canada ever closer to using key resources sustainably and creating the next generation of biofuels.”

This award is in addition to the $4.72 million awarded to date from SDTC’s SD Tech Fund™, representing an aggregate contribution to Lignol from SDTC of up to $6.78 million. The duration of the current work plan, that commenced September, 2009 with the support from SDTC, will be extended until Q3 2013 with an overall total project cost estimated to be $20.4 million. The original project resulted in the establishment of a world-class integrated industrial scale facility for the production of cellulosic ethanol and unique renewable biochemicals. The additional scope of the project will result in further enhancement to Lignol’s biorefinery technologies, focusing on greater utilization of hemicellulose-derived sugars and demonstration of industrial, value added applications for Lignol’s high performance lignin (“HP-L™ Lignin”) in the plastics and materials industries.

"Lignol Innovations is commercializing its unique integrated cellulose to ethanol process technology for biorefining ethanol (fuel alcohol), pure lignin and other valuable co-products from renewable and readily available biomass.  The technology is based on original ‘Alcell’ biorefining technology that was developed by General Electric and Repap Enterprises at a cost of over $100 million.  Lignol also intends to invest in, or otherwise obtain, an equity ownership in energy related projects which have synergies with its biorefining technology.

Lignol’s growth is taking place in a period of unprecedented demand for fuel ethanol in North America driven by renewable fuel standards, high fossil fuel prices, environmental impacts on climate change, and fundamental concerns for energy security in the U.S. Currently 12% of the US corn crop is used to produce fuel ethanol. Increasing demand is expected to drive that figure to nearly 30% in 2012. New technologies are required to produce ethanol from biomass cellulose rather than from the fermentation of valuable grains. The company's technology and know-how has positioned the company as one of the world's most promising "Cellulose to Ethanol" solutions.

As part of a Jan. 23 2007 State of the Union address outlining his plan to reduce the nation's dependency on foreign oil, President George W. Bush required the production of 35 billion gallons a year of renewable and alternative fuels by 2017, a 500% increase over 2012 targets set by congress.

"One way to reach the president's objective is offered by Chris Somerville, professor of biological sciences at Stanford University and director of the Carnegie Institution's Department of Plant Biology. Somerville advocates increasing the production of cellulosic ethanol, which is distilled from the fermentation of sugars from the entire plant, not just the grains.

The main reason behind the call for increased biofuel production is to reduce emissions of greenhouse gases, not because we are running out of fossil fuels, he added. ''There are reserves of coal for 200 years at least, and coal can be liquefied into fuel, but it produces an awful lot of CO2,'' he explained.

Biofuels, on the other hand, are carbon-neutral sources of energy, Somerville said, noting that plants absorb atmospheric carbon dioxide during photosynthesis, which compensates for the CO2 that is released when biofuels burn."
--- Science Daily.com

"Government mandates for the use of renewable fuels, concerns for energy security and reductions in greenhouse gas emissions are driving demand for fuel-grade ethanol and renewable chemicals world-wide. The clean energy industry has predicted that the global market for biofuels such as cellulosic ethanol will grow to US$112.8 billion by 2020."
--- Clean Edge Inc., Clean Energy Trends 2011 .

Finally - prior to going public Lignol had what would be equivalent to $2.00 per share (based on approximately 50,000,000 shares issued & out) worth of proprietary GE developed technology.

To all of our readers - a very happy Easter weekend to each and every one of you.  I own shares in Lignol Energy Corp. - As always please do your own due diligence.
Posted by Johnston-Sequoia Research at 12:22 PM 3 comments: