SenescoTechnologies, Inc. (AMEX: SNT) announced the initiation of patient dosing in its Phase 1b/2a clinical study of SNS01-T at the Mayo Clinic in Rochester, MN. The study is an open-label, multiple-dose, dose-escalation study which will evaluate the safety and tolerability of SNS01-T when administered by intravenous infusion to relapsed or refractory multiple myeloma patients.
Highlights Include:
"We are excited that the SNS01-T study is underway and intend to provide material updates as it progresses.  Although the trial is primarily designed to confirm pre-clinical safety and tolerability in patients, we are keenly interested in getting a look at the battery of tumor response markers including M-protein and C-reactive protein that could provide evidence of a response."
--- Dr. Leslie Browne, President & CEO
About Multiple Myeloma
"Multiple myeloma is an incurable cancer of plasma cells, a type of white blood cell derived from B-lymphocytes, normally responsible for the production of antibodies, in which abnormal cells accumulate in the bone marrow leading to bone lesions and interfering with the production of normal blood cells. Senesco was previously granted orphan drug status for SNS01-T, the Company’s lead drug candidate for treatment of multiple myeloma."
---  2011-11-03 Senesco Technologies Press Release 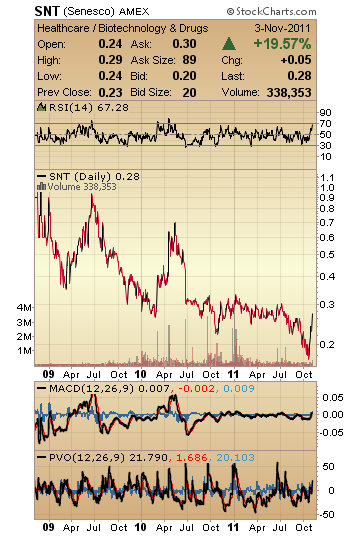 Johnston-Sequoia Commentary:
Ironically today is the most advanced Senesco Technologies has been in the past 10 years (click on ten year chart below).  Irony that is not lost on and/or without opportunity.  Opening the day at just $0.23 and closing recently at $0.18 one would find it difficult to imagine that this company has a very realistic shot at a cure to a form of and/or potentially muliple forms of cancer and certain inflammatory and ischemic diseases. Forgetting for a moment that under the same umbrella of SNT you have exposure to the innovation of programmed cell death in plants that has application in improving crop yields - Just to be a part of something so potentially meaningful is an opportunity that does not come along every day.
"Senesco Technologies is leveraging proprietary technology that regulates programmed cell death, or apoptosis. Accelerating apoptosis may have applications in treating cancer, while delaying apoptosis may have applications treating certain inflammatory and ischemic diseases. The Company has initiated a clinical study in multiple myeloma with its lead therapeutic candidate SNS01-T."
--- 2011-11-03 Senesco Technologies Press Release
We are not advisors of Senesco Technologies (though we have been monitoring them closely for the past three years & SNT is our second overall pick) however, we certainly are shareholders. We thank our friends at Discovery Investing for introducing the company via Morning Notes over three years ago.   As always please do your own due diligence. 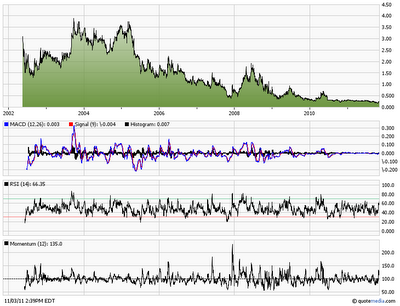